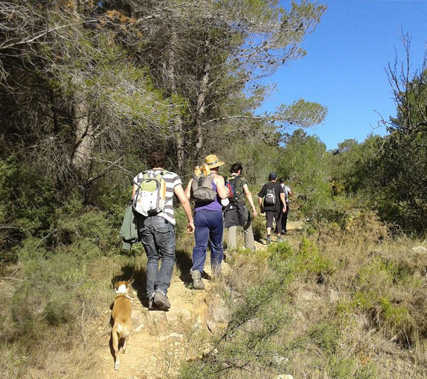 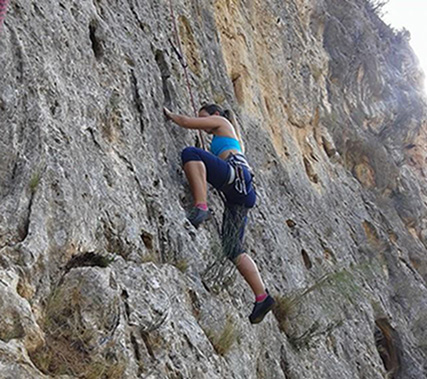 Trek of The Mills.

Average duration: 2h.15m. Difficulty: Easy.
The Trek of the Mills is without a doubt the most important in this town and it is beautiful! It starts in the Charco Azul, a spring with crystal clear waters. In this trek you will visit the old buildings that took advantage of the water pressure for different uses from the 18th century until the beginning of the 20th century. Where the infrastructure was built to endow them with utilities to survive: dams, canalizations, floodgates, these are now integrated into the fluvial landscape of this corner of Alborache. The Trek of the Mills is an easy trek for anyone on foot, bicycle or even on horseback, and the trek also has some panels that give information about the old mills that you see on the way and about some of the constructions made for water use.

Average duration: More than 5 km. Dificultad: Family Route.
A pleasant walk of just over 5 km by the immediate environment of the population between irrigated and dry land, whose only difficulty is the descent and climb of the ravine of San Jaime, just outside the town, where we can see a varied and leafy vegetation in which dominate the almeces (lidoneros), pomegranates and poplars, and among them multitude of birds. As interesting points of the route we highlight, in addition to the ravine of San Jaime, the Fuente de la Agricultura, the Forata Canal and the Alborache and Buñol Water Treatment Plant that has returned transparency to the waters of the river.

Average duration: More than 20 km.
After leaving the green route, we ascend to La Ceja Peak, crossing one of the best spots of the terms of Alborache and Macaste. Cresteando between this Mediterranean forest, with exceptional views to the north and south we observe the villages of the region, its mountains, and the valleys excavated by the passage of the rivers Magro and Buñol. On this route of just over 20 km, the meanderings and cuttings of the Buñol River stand out, as well as the ruins of the Bernat Mill, the La Ceja Peak and the Magro River valley, where the interesting Mediterranean pine forest areas alternate, with immense agricultural transformations of a strong environmental impact.

Average duration: More than 28 km.
Having followed the common sections of the green and blue routes, we will continue the red route for which we must be in good physical shape to overcome the hardness of the last kilometers, but in return we will access the highest point of the term of Alborache, the Cañada de Socaña, from where at the foot of the Sierra de Dos Aguas or the Ave, our view will have no obstacle to reach really spectacular panoramas. They are 28 km. of route in total in which the strong and prolonged ascent of almost 4 km stands out to the Socaña gorge. 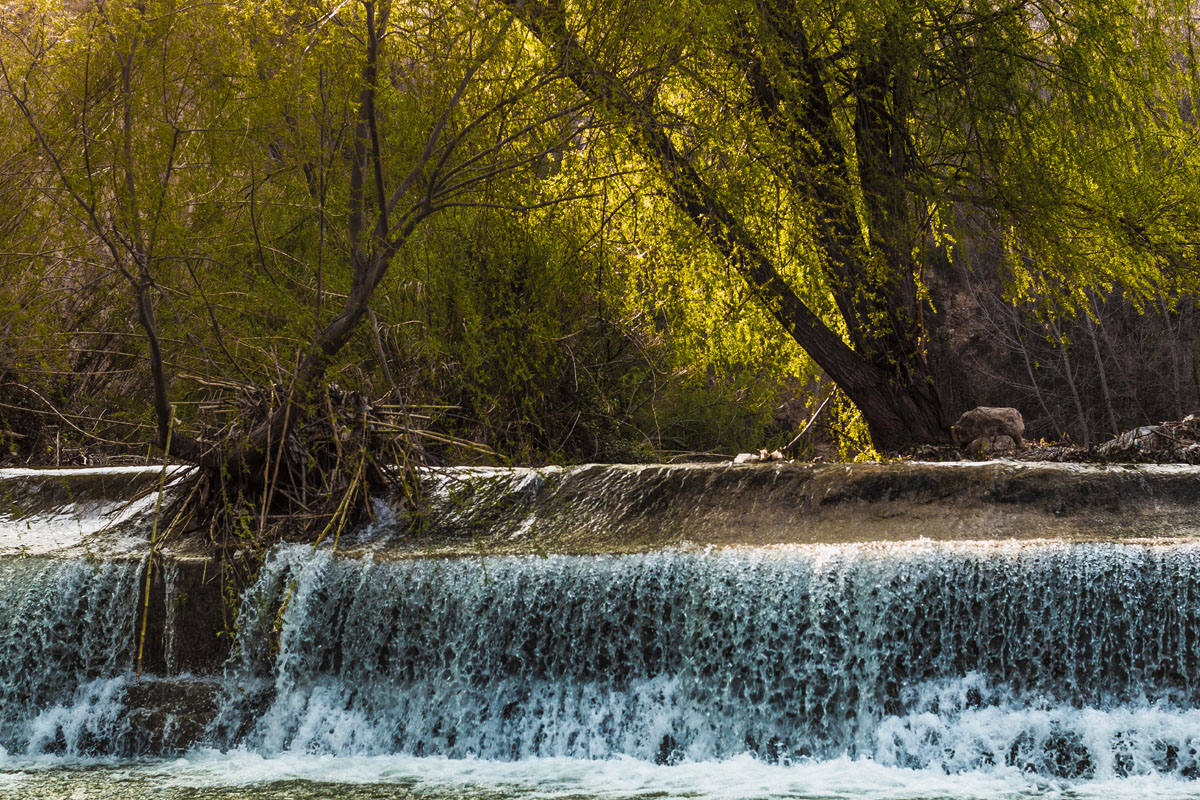 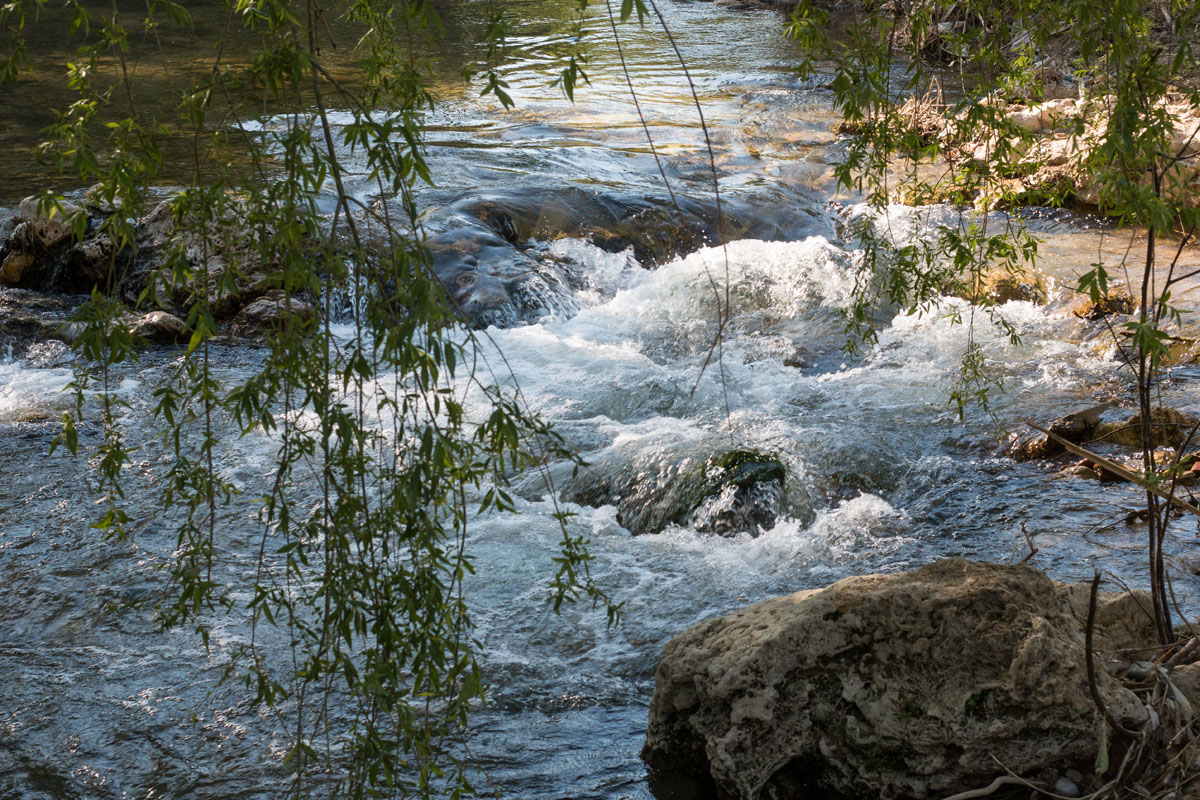 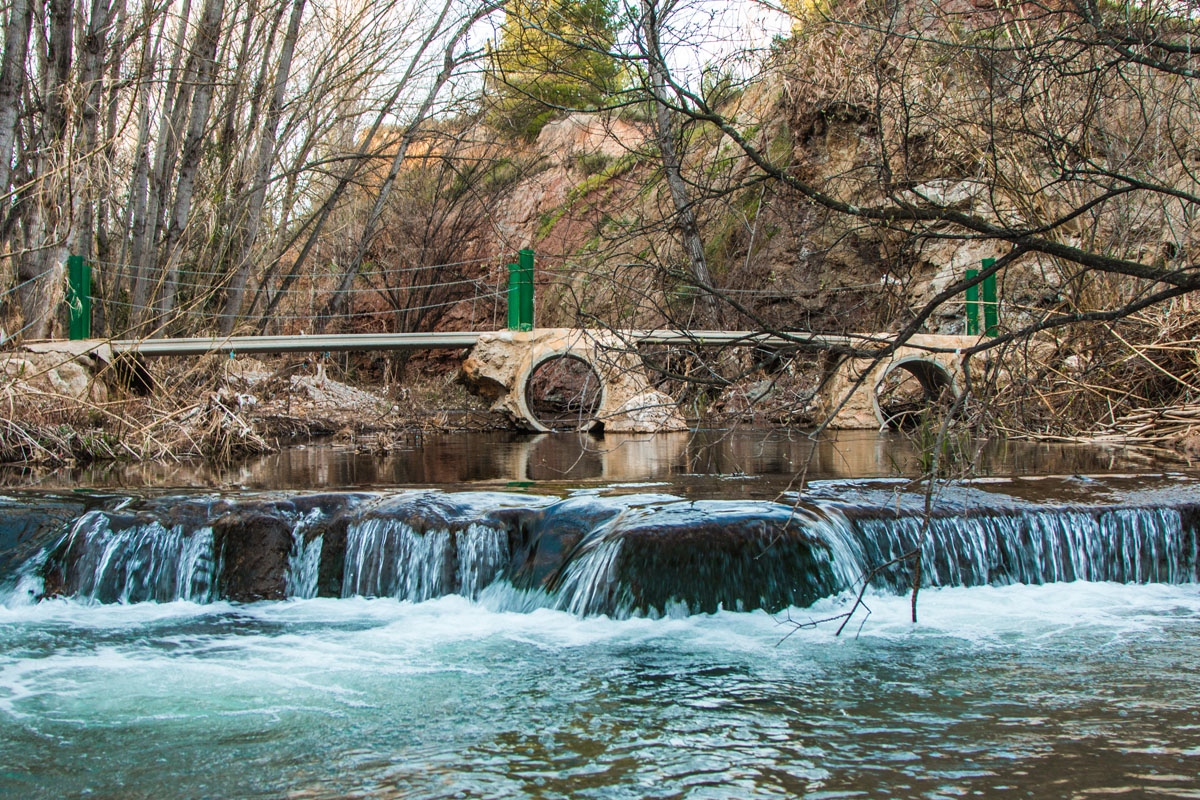 Total distance: 10,5 KM. Average duration: 3h.30m. Difficulty: Medium. Type of trek: Circular. Starting point: Parque San Luis.
This is a very popular trek in Buñol with beautiful and abundant views. It starts at the Paseo de San Luis de Buñol. You go up some stairs next to the Music Auditorium until you get to a road that takes you to the Fuente del Roquillo. After crossing the river, you go up a path between pine forests with beautiful views, until you reach Alto Jorge. From here, you go down to the riverbed of the river Buñol, where you can appreciate some great panoramas. You cross the ravine and go to the left by the PR-CV 190, until Buñol. From there you follow the yellow and white markers. You will pass through the climbing areas of Cueva Grande-Corral de Cabras and descend to reach the area of the baths of La Jarra, arriving at the San Luis promenade.

Total distance: 9,2 KM. Average duration: 3h. Difficulty: Medium. Type of trek: Circular. Starting point: Parque San Luis.
A circular trek that connects the points of greatest scenic and tourist interest. This circular trek has a starting point in the Parque de San Luis, it crosses the Fluvial Park and then continues towards the Turche Cave. Once there it follows the irrigation channel to the Charco Mañán, with a view to the Cueva of the Palomas, then continues to the lookout of Monte La Cruz and ends with a descent to the Parque de San Luis.
Access the GPS of the Route

The Path of Santiago to Valencia.

This is the real path to Castilla that was used by pilgrims who were going to Santiago from the city of Valencia during the 15th, 16th, and 17th centuries. This path started in Valencia and ran through Chiva, Buñol and Requena and went as far as Cuenca. Buñol is the end of the second stage and the beginning of the third. The trek of Buñol begins at Av. Blasco Ibáñez, C / Condes de Buñol, down to C / Florida Blanca, then Buñol Castle to the town square, S. Pedro Apóstol Church, then to the direction of Parque S.Luis and continues towards Monte La Cruz to go to Siete Aguas.

IF YOU WANT TO RESERVE ANY ROUTE WITH MONITOR CLICK HERE 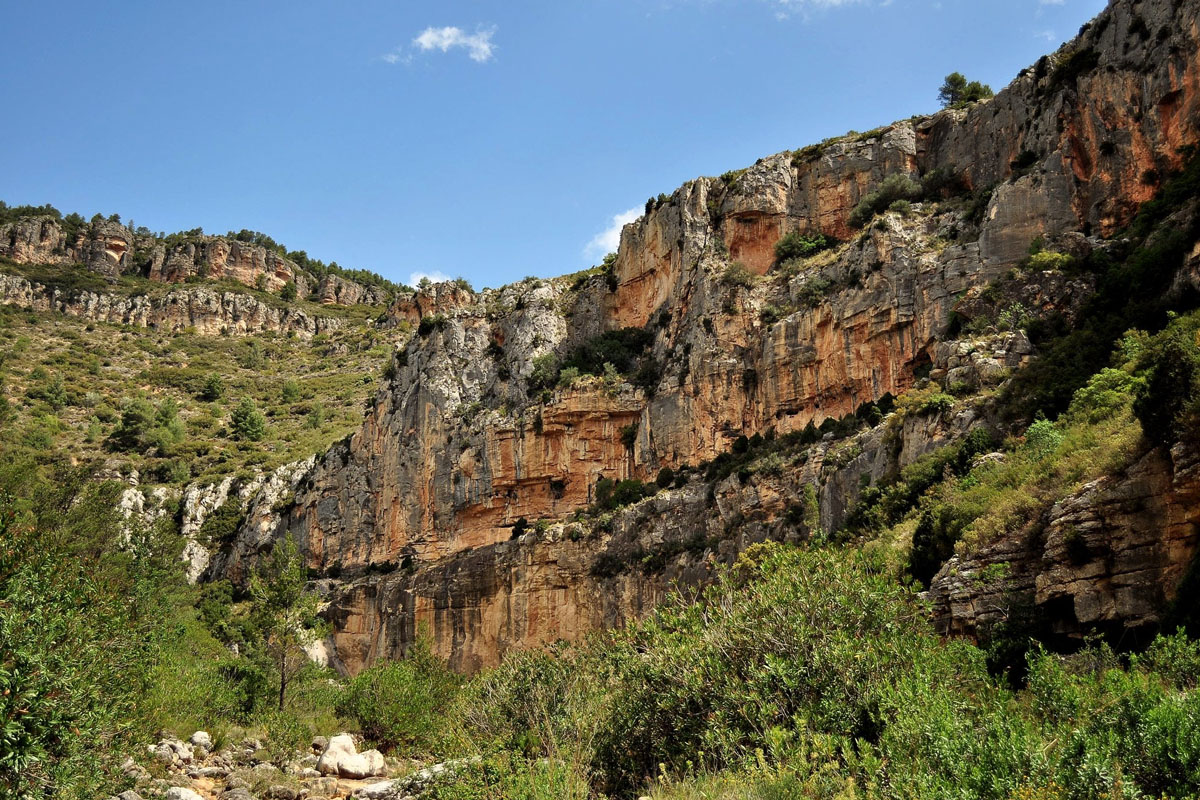 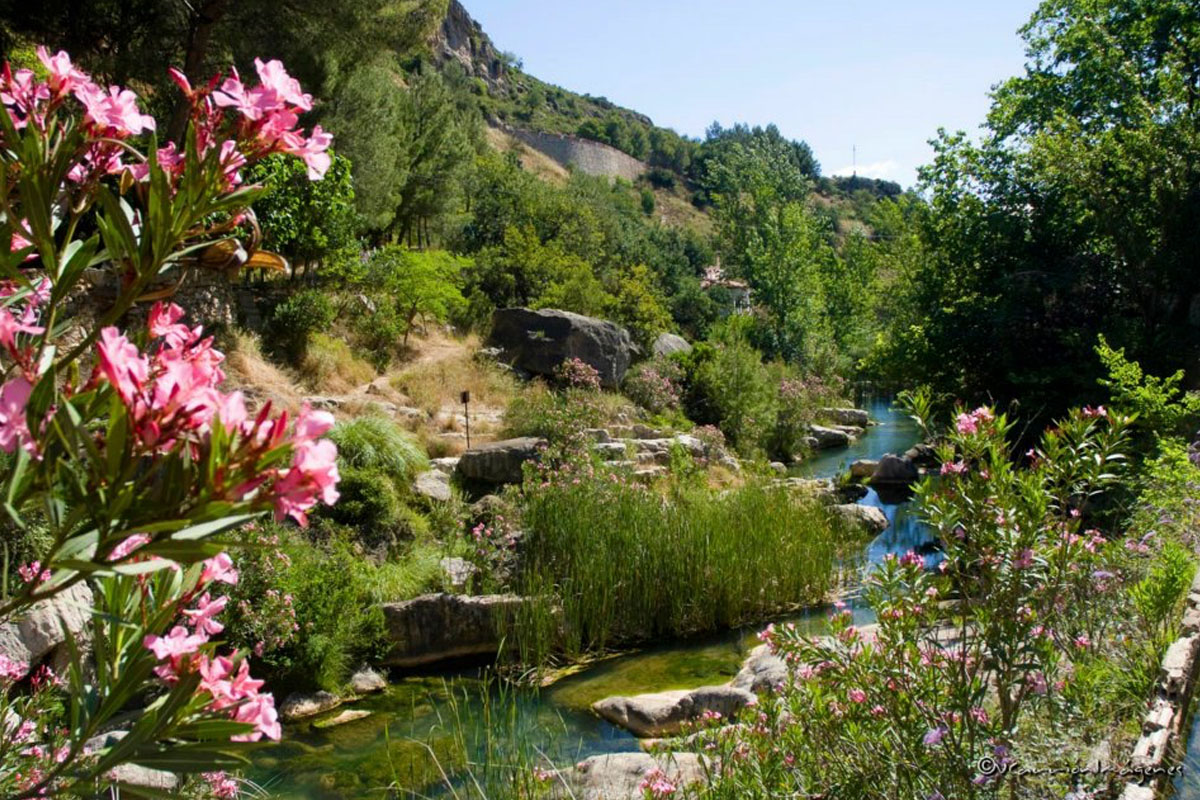 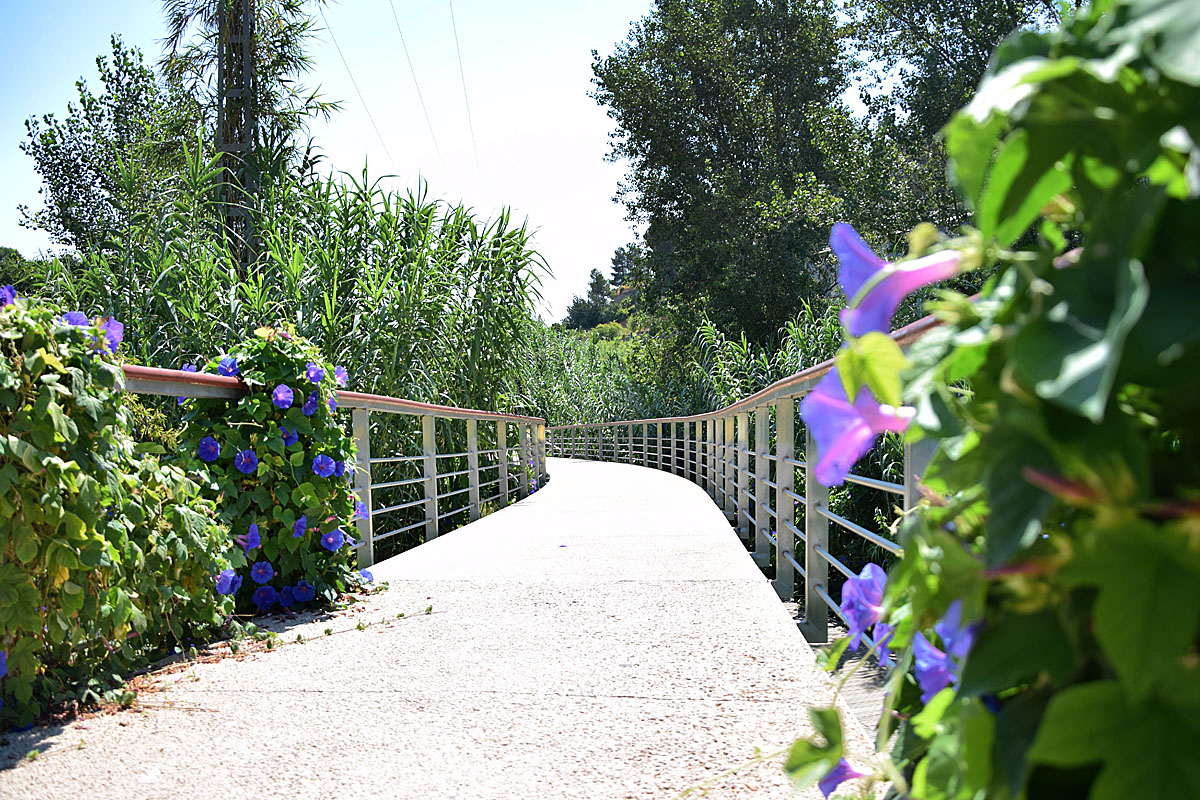 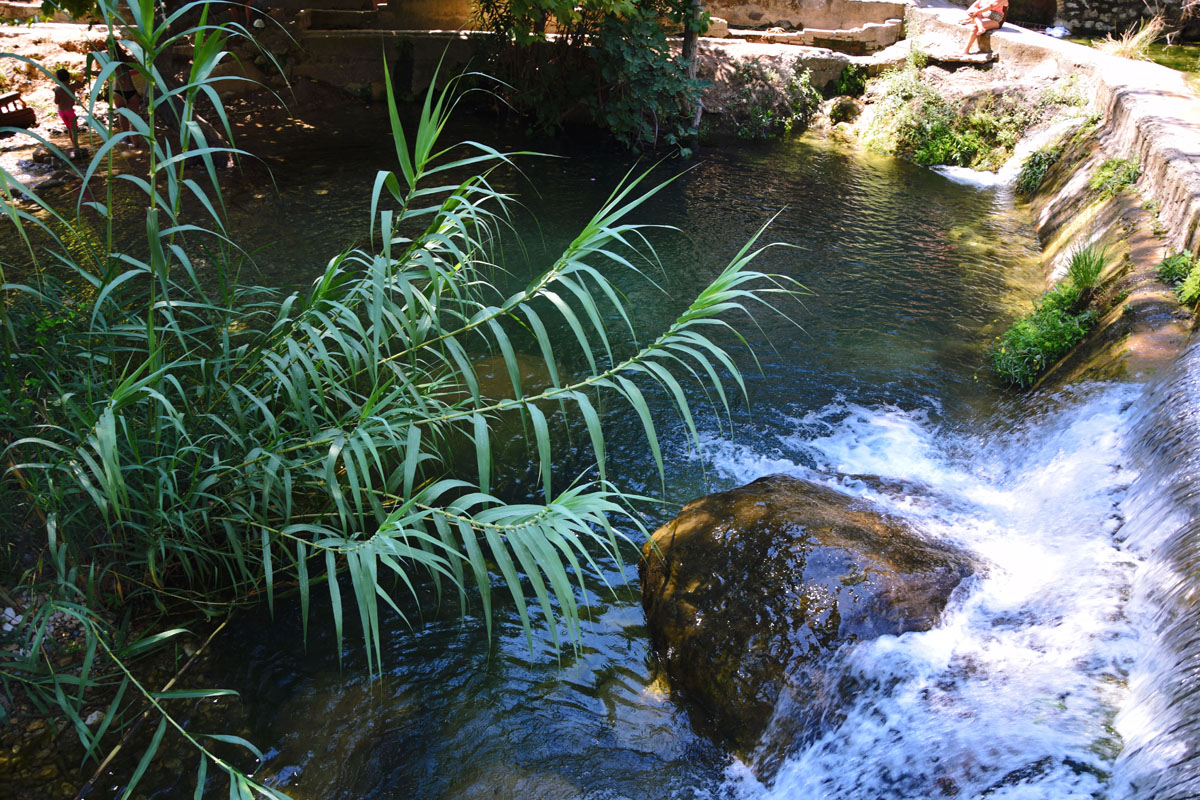 At the foot of the slope of the Castle is the Fountain of Bolot spring, a place with special charm for visitors, as there is no “higuero” (a word used to refer to the tourists who visit the town at the time of the figs) that doesn’t boast that they have gone through here. 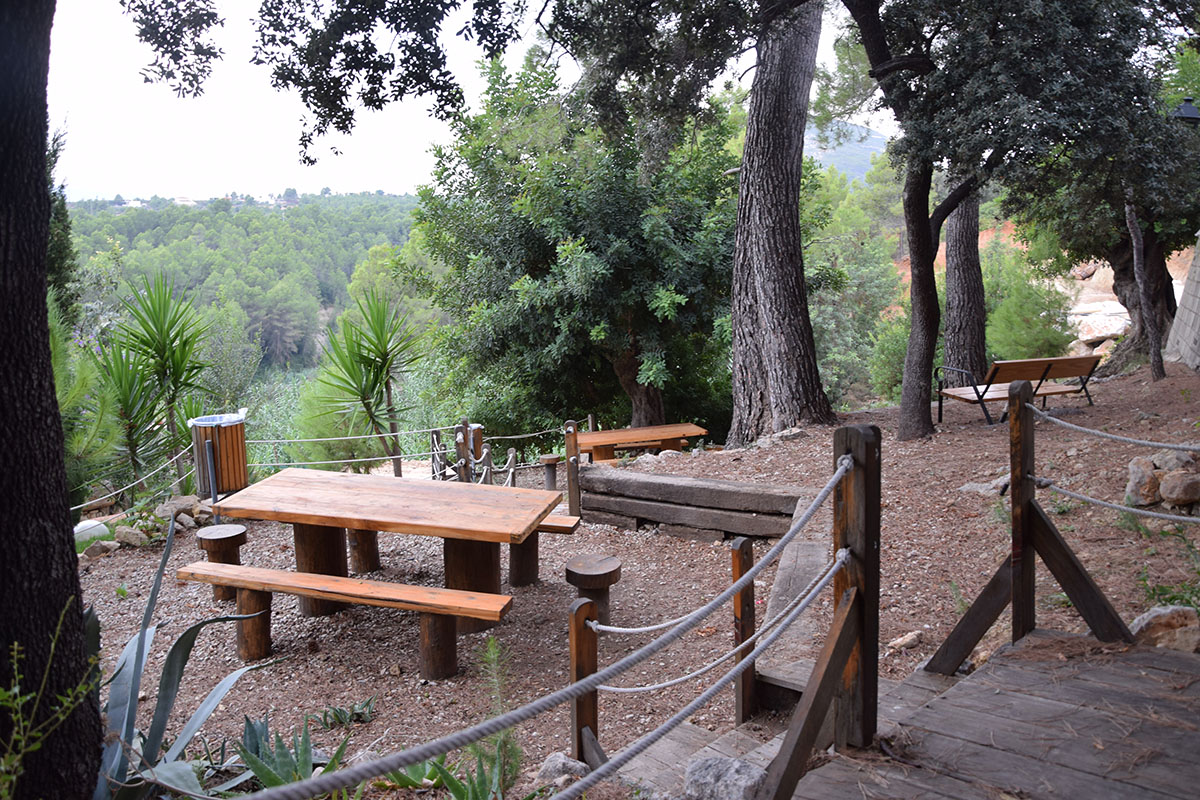 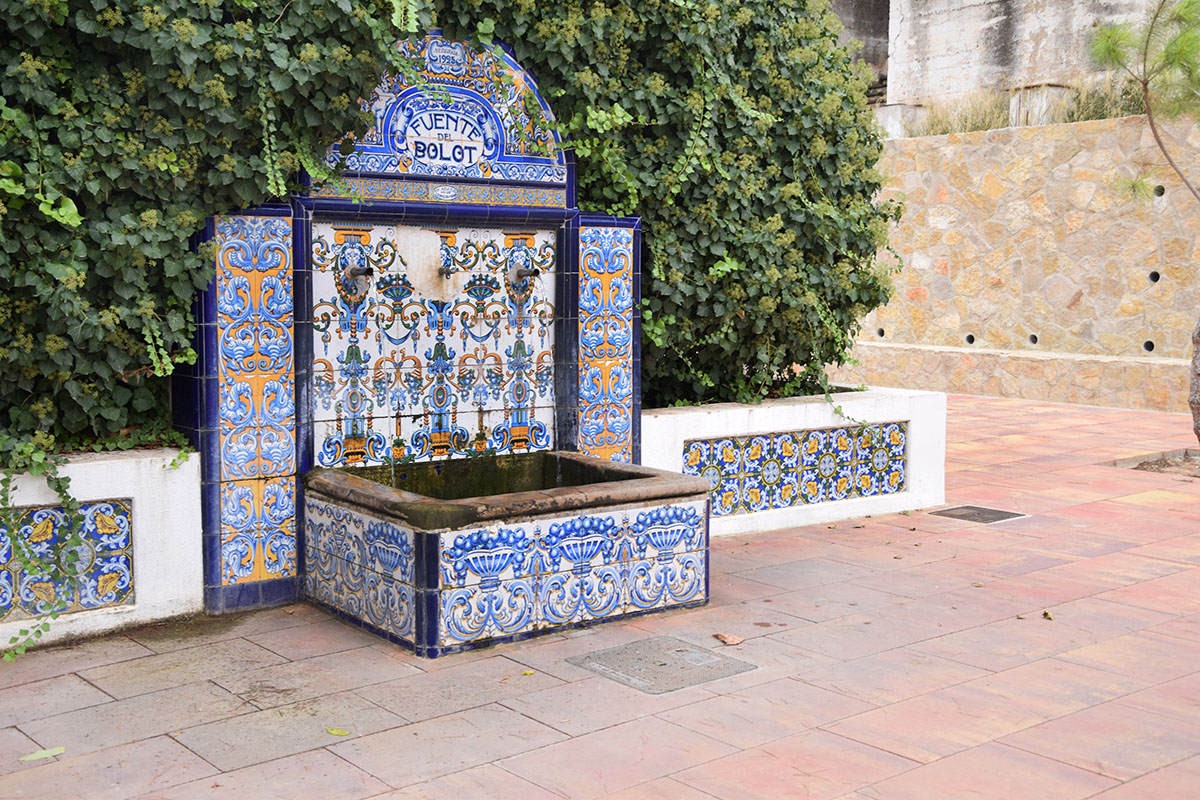 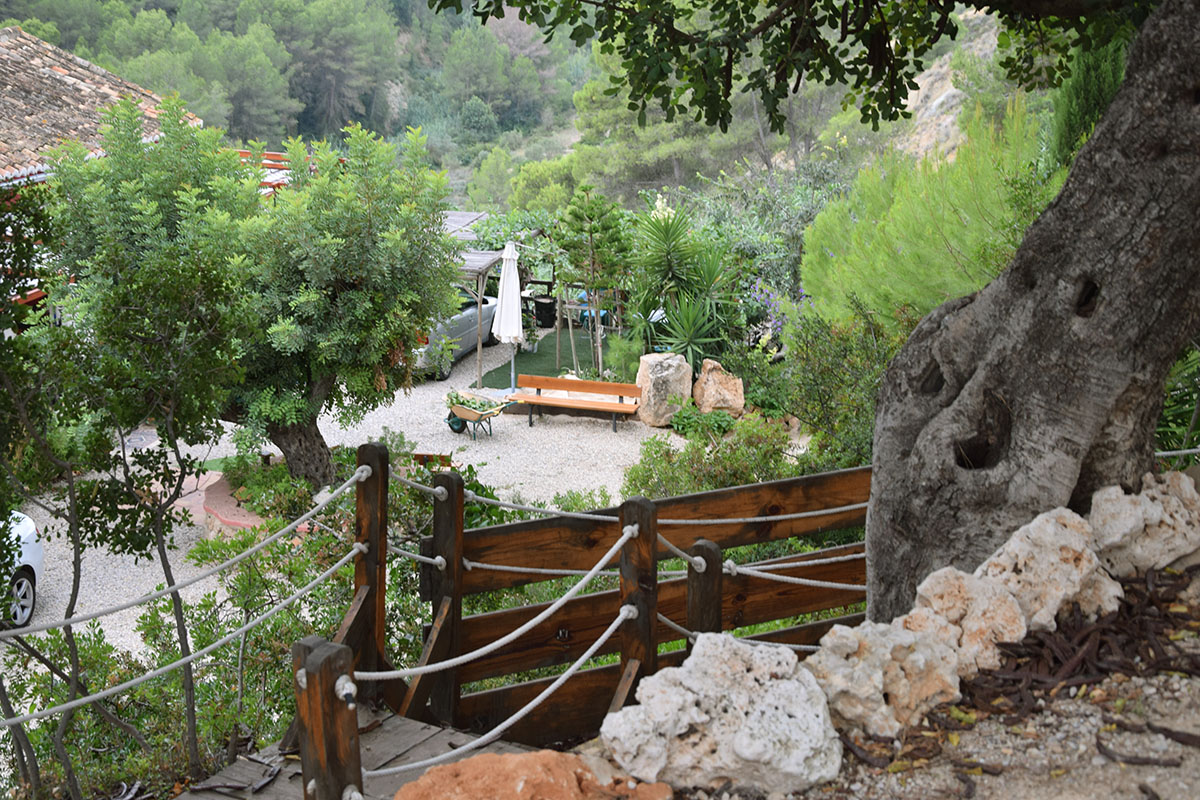 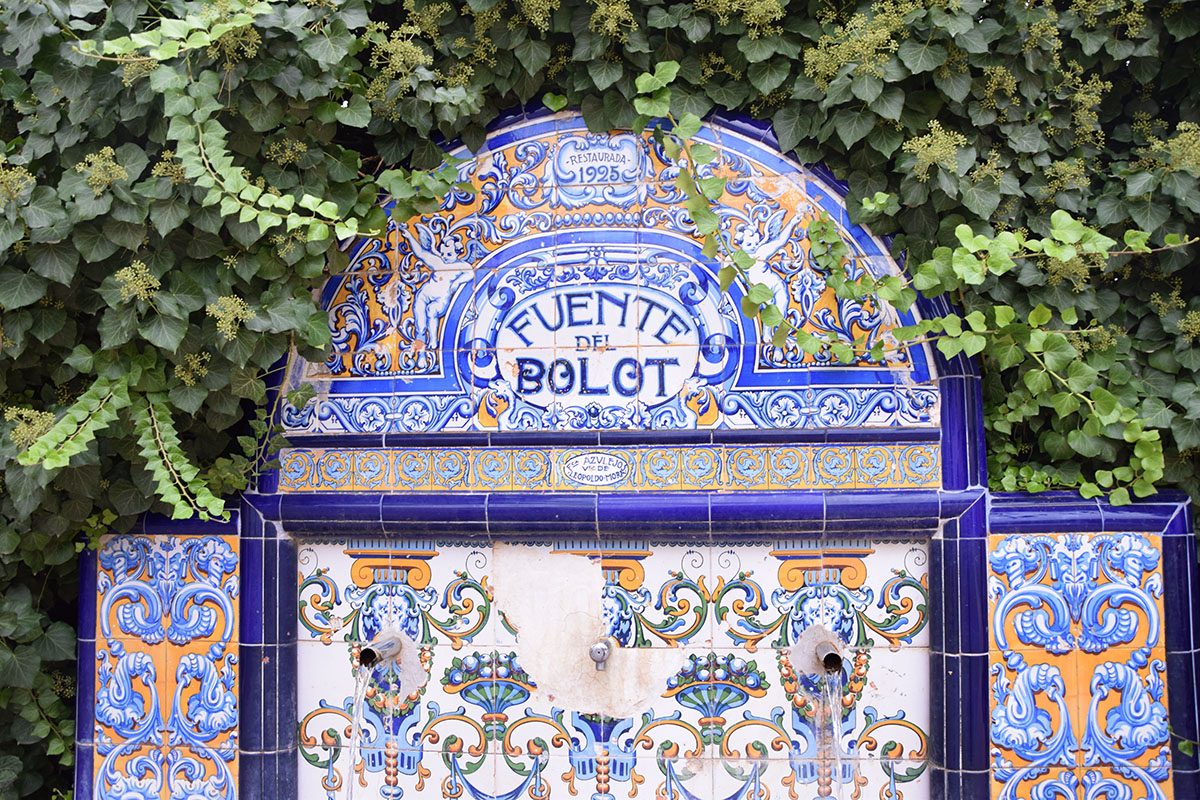 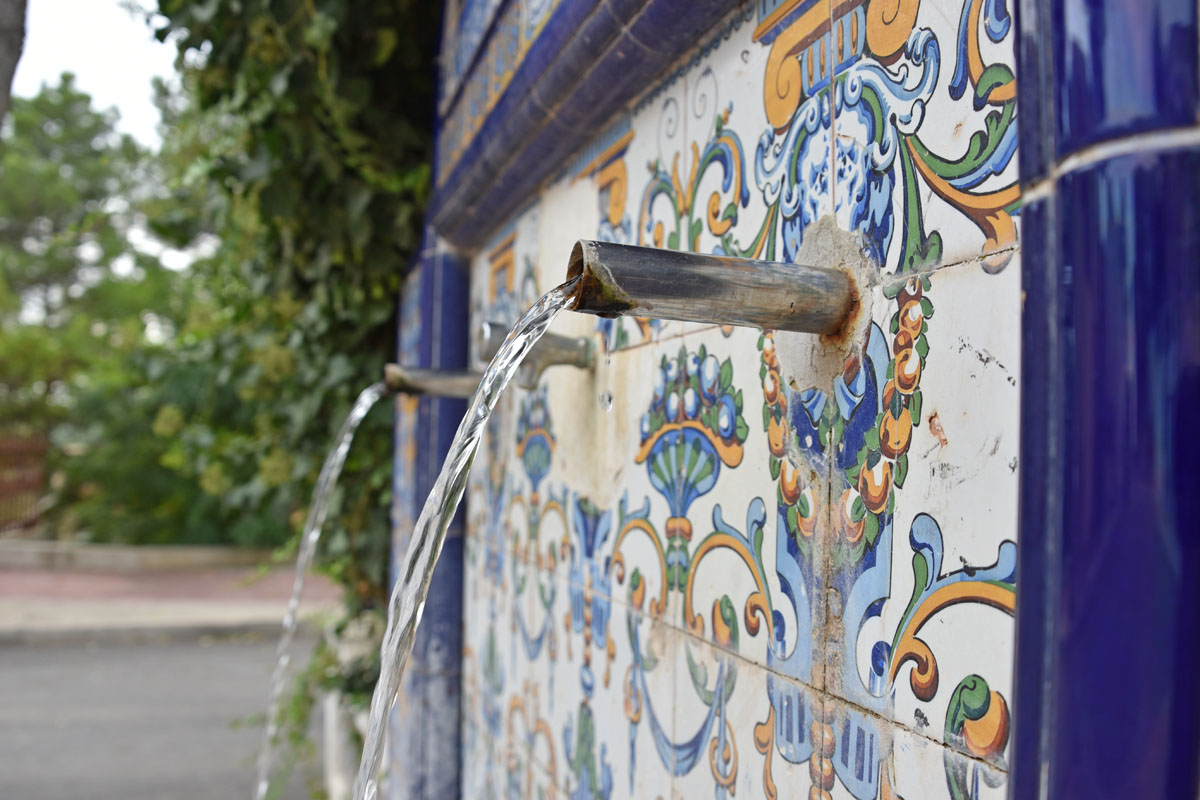 Birth and Village of the River Mijares.

Access to the “birth” of this river is through the local road that goes from Yátova to Hortunas, taking a signposted detour to the village of Mijares. The point known as the “Birth of the river Mijares” is the place where the waters of this river re-emerge after disappearing before reaching the village of Mijares. The tree-covered landscape that surrounds the river Mijares, and its crystalline waters with abundant natural pools, hardly receives any urban attention. The GR-7 grand tour goes through this area and also has the option of seeing the House of the Coronel, a hostel and interpretation center that is awaiting renovation.

Declared a Municipal Natural Area in 2007, the Tabarla enclave corresponds to a section of the Magro River and its riverbank, located 19km from the urban area. Its location is a beautiful area of the middle river valley, where the course of the river and the forested riparian formations create an environment of unequalled visual beauty. The isolation of the site, which can only be reached by a hiking trail, adds to its interest. It is thus a must-see for all those who love hiking through nature.

Cave of the Doves.

Cueva de las Palomas is a natural area with a main attraction of a unique cascade of approximately 20m high that is formed naturally when it rains. It is located just 5km from the town. In recent times this spot has been equipped with a recreational area composed of two camping areas and a variety of facilities such as barbeques and services. 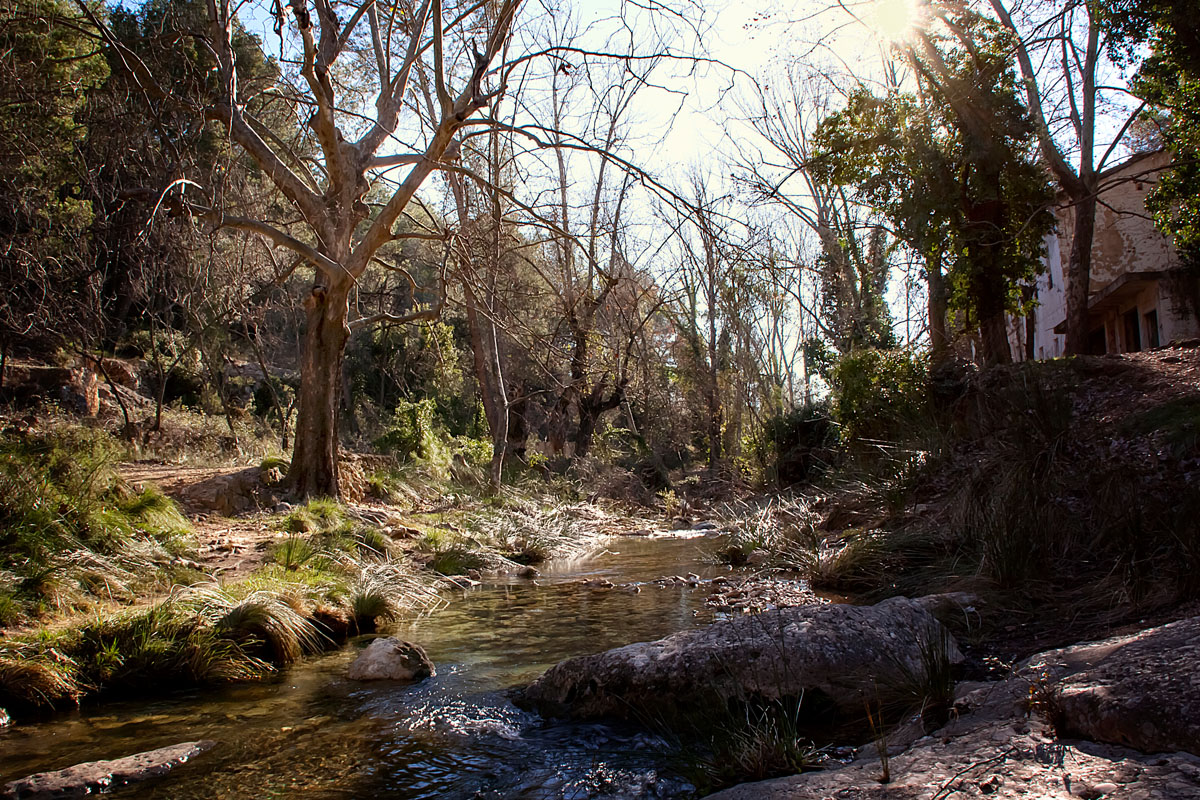 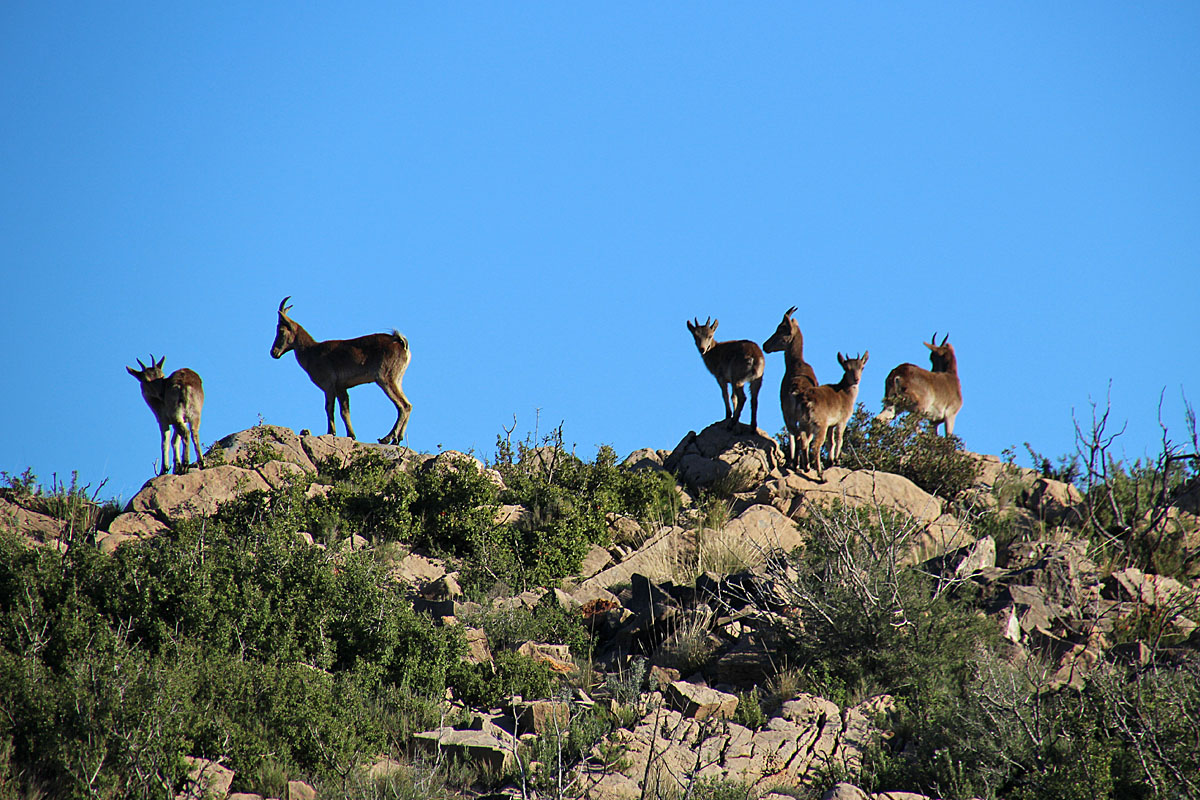 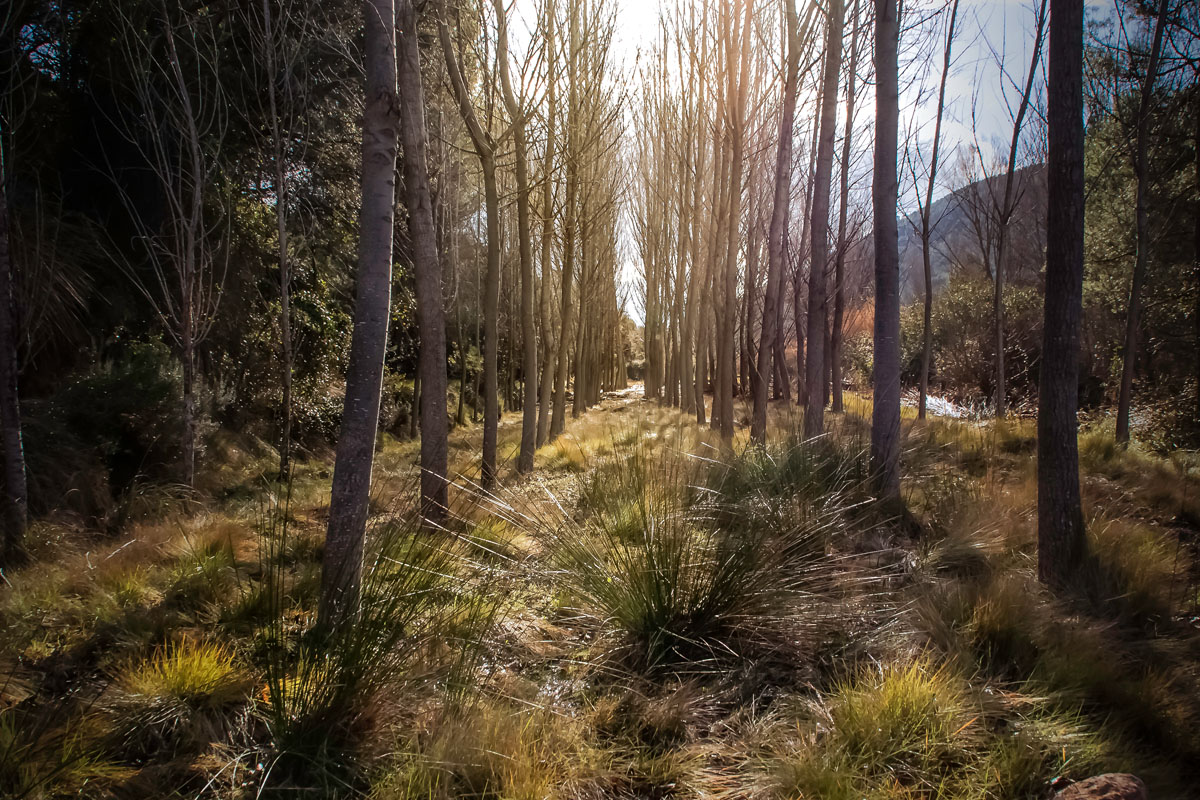 The northwestern Yátova Alto del Cerro trek connects with GR-7, and runs through the Pardenillas mountains up to the Mijares Valley.

This southeast trek runs along the southern edge of the municipality, up to the Sierra Martés, and serves as a link between GR-7 and the town. You will walk through the Forata Reservoir, and can even reach the refuge of Manquillo in Sierra Martés. It also connects with the GR-7 long-distance trek, but in the southern section. The trek is of medium difficulty because of its length and broken trails, but does not require special equipment or training. You will have to bring some water. 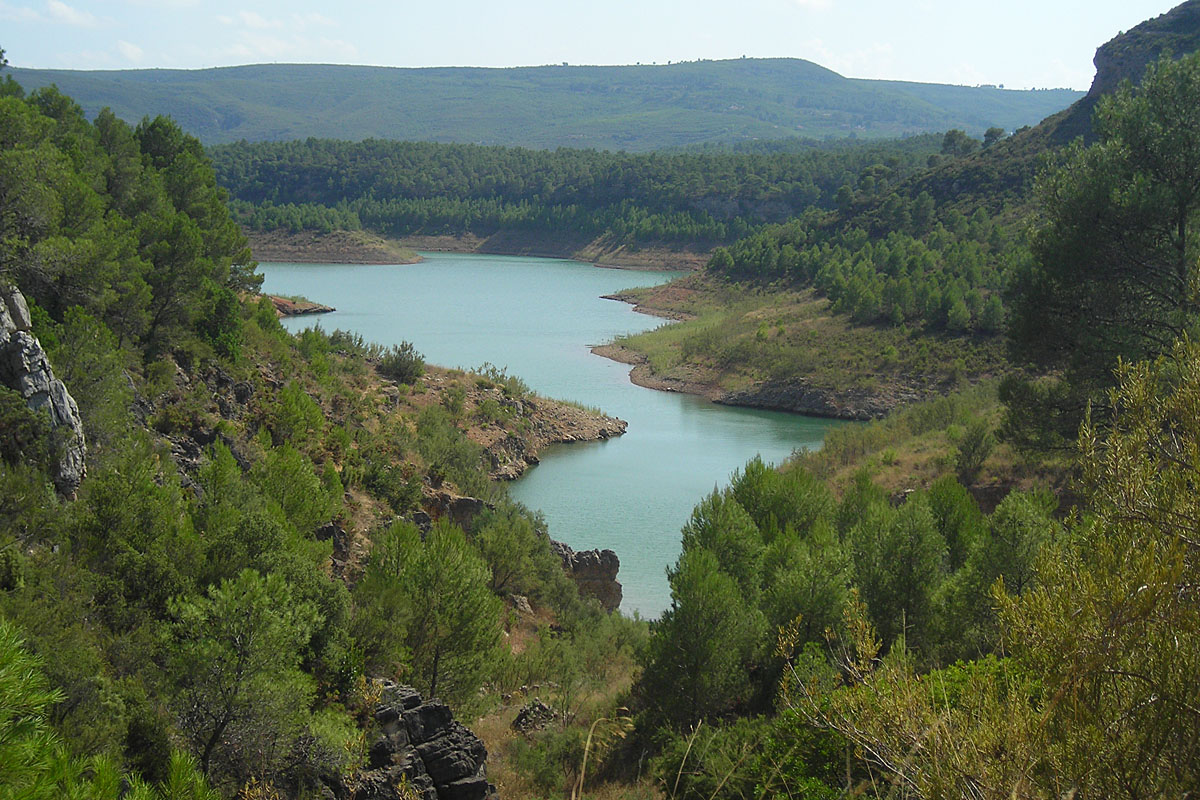 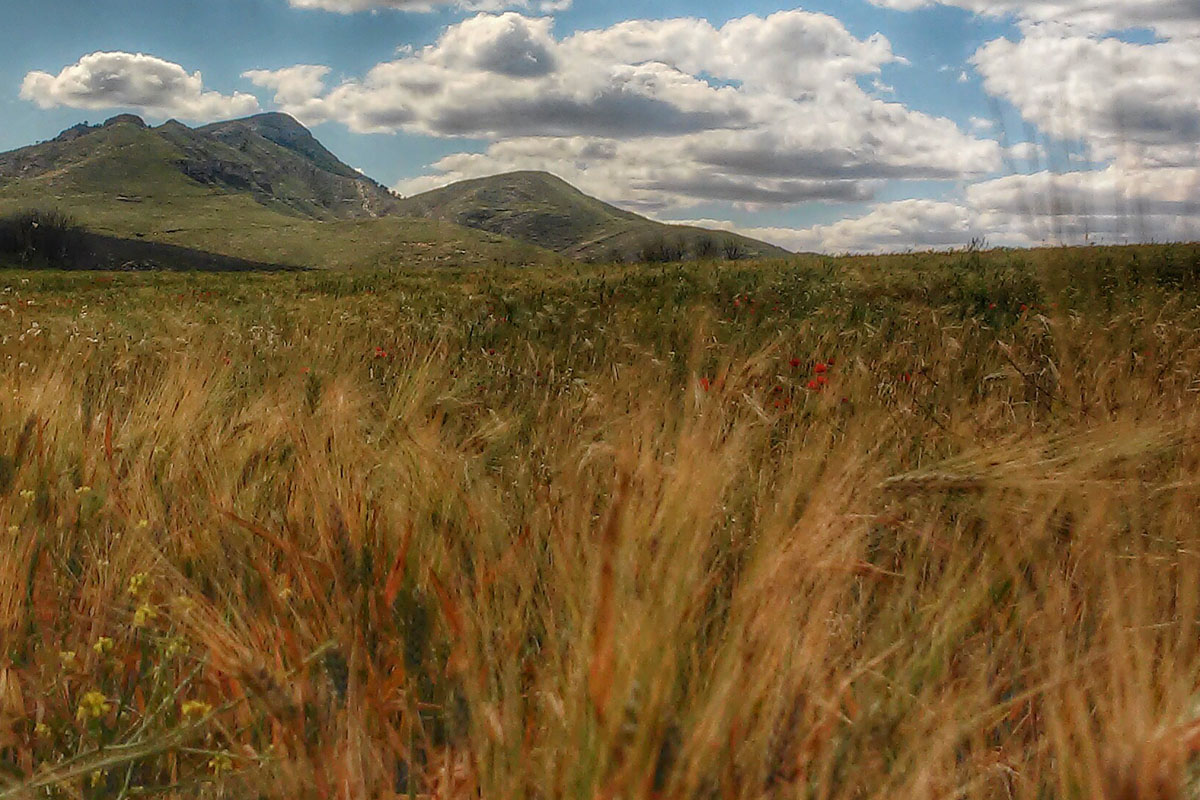 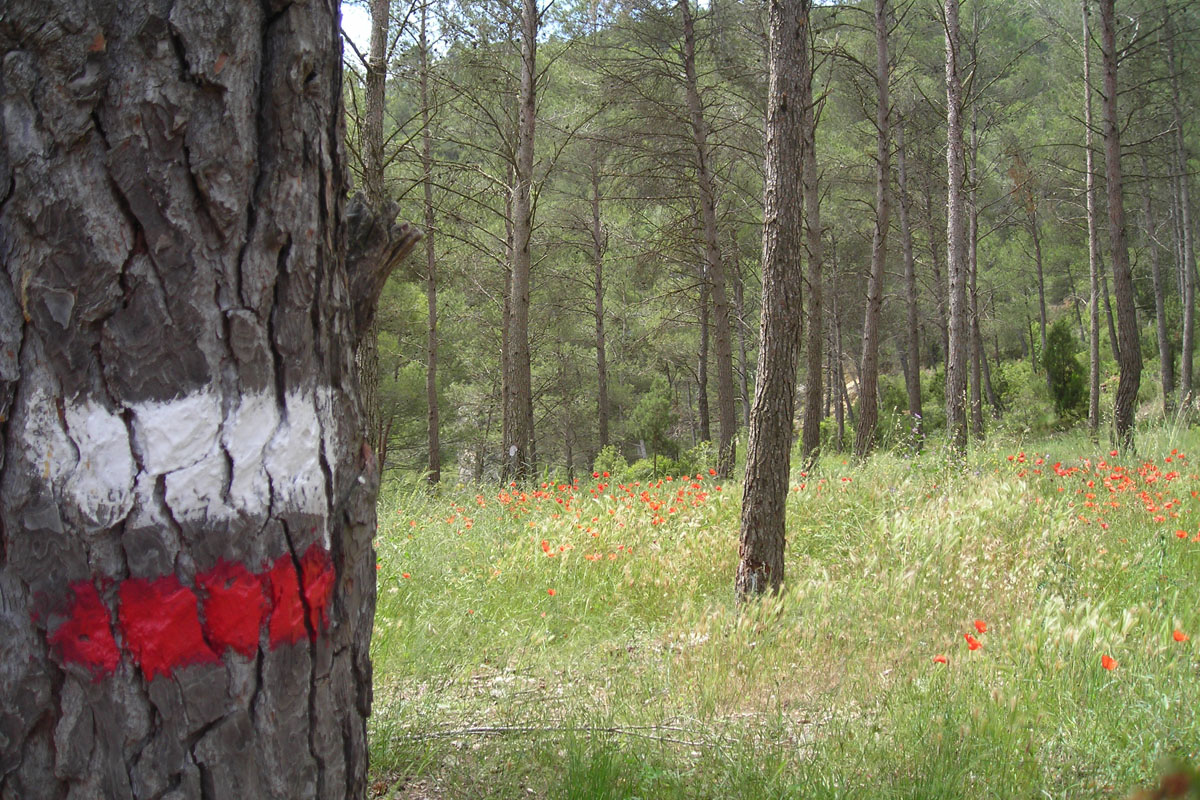 The calcareous and karstic character of the landscape of the Hoya de Buñol has favored the creation of innumerable sinkholes. Sinkholes and chasms spread throughout the region. Barranco Puente Natural Carcalin: At the level of this ravine is the beginning of the main course of fun, with the descent of the Carcalin Cave, with a lake inside.

The Hoya de Buñol has about 300 climbing tracks divided into 6 sectors. The areas of most interest are:
– La Jarra, in the gorge of Carcalín. There are about 80 tracks in this sector.
– El Puente Natural, in the same ravine, with some 20 tracks to enjoy.
– Ventamina, in the ravine of Baladrar next to the A-3, with several tracks of more than 30m in sports and classic.
– Roma. This can be accessed from the Buñol River, upstream to the landmarks with ceramic signs.
– The Climbing Wall is managed by the TENSA Climbing Group. It is located in the Molino Galán building (municipal property). 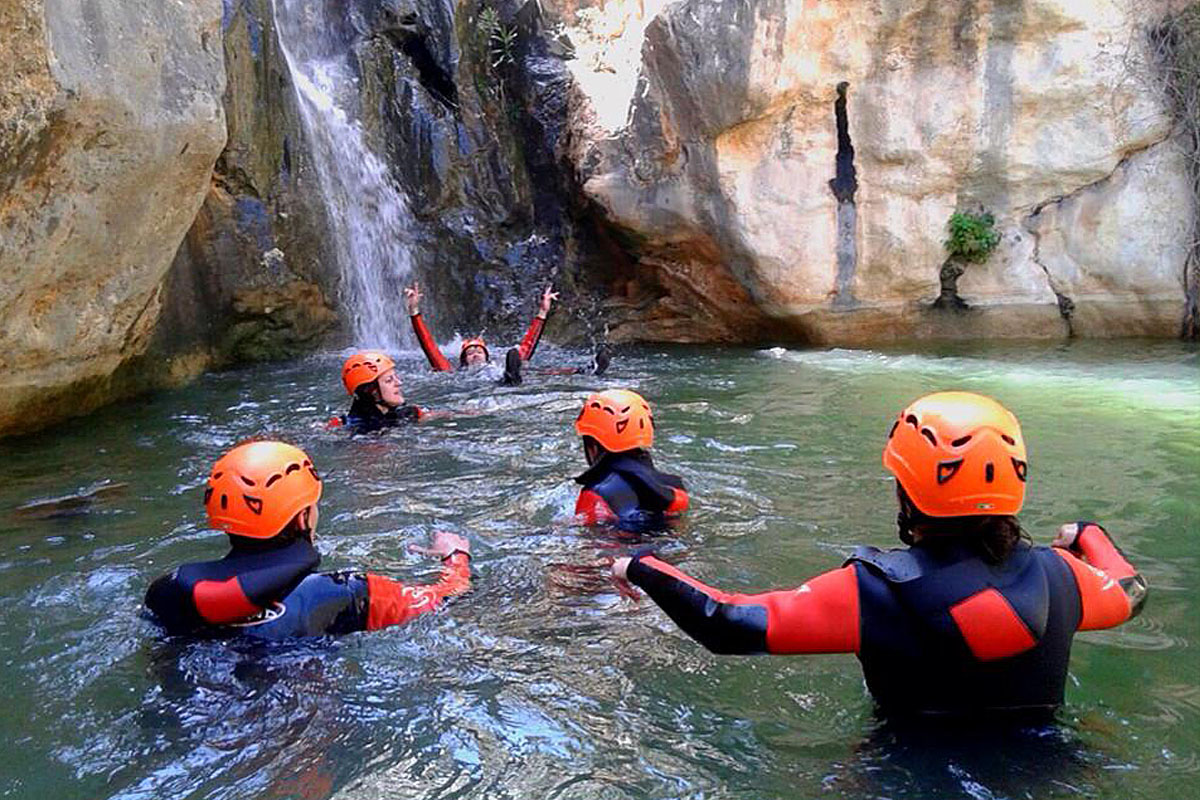 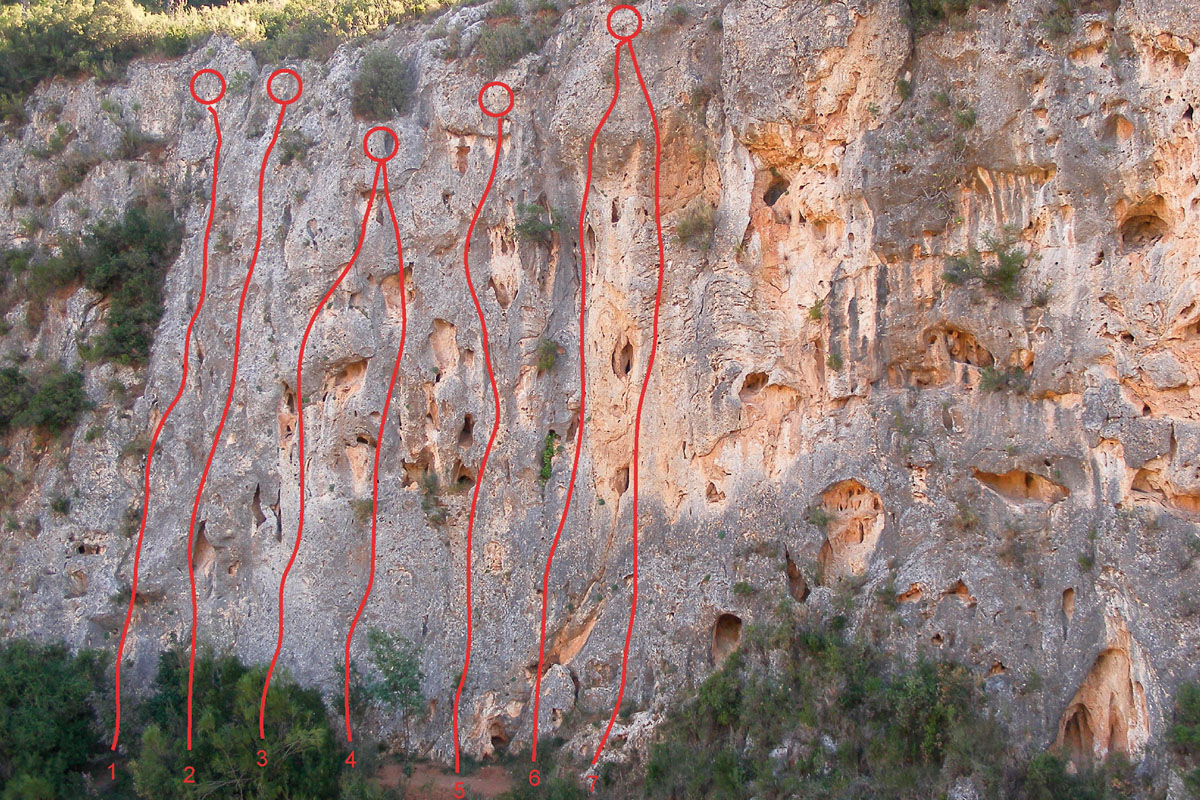 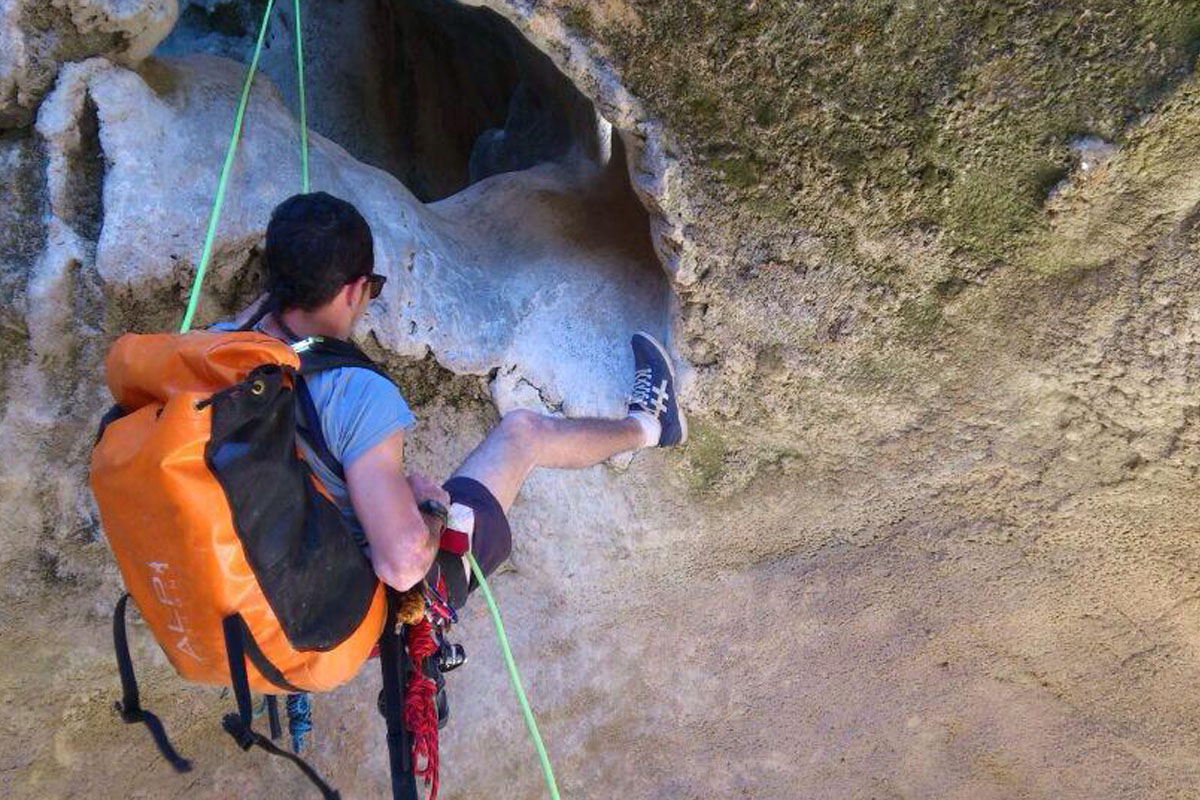 If you like sports, you can not miss out on the hoya races.

In our Hoya, we are also fans of running and we have many races. In Buñol there are three races: Carrera la Tomatina, Trail Buñol and Carrara Raquel Lavilla. You can register and see more information on the website of Los Correores de Buñol. In Macastre you will find the 10K Volta a peu, in Yátova the Carrera Popular Villa de Yátova – 10km, and to finish, in Alborache the Trail de Alborache. Information about these races can be found on the websites of the corresponding municipalities. 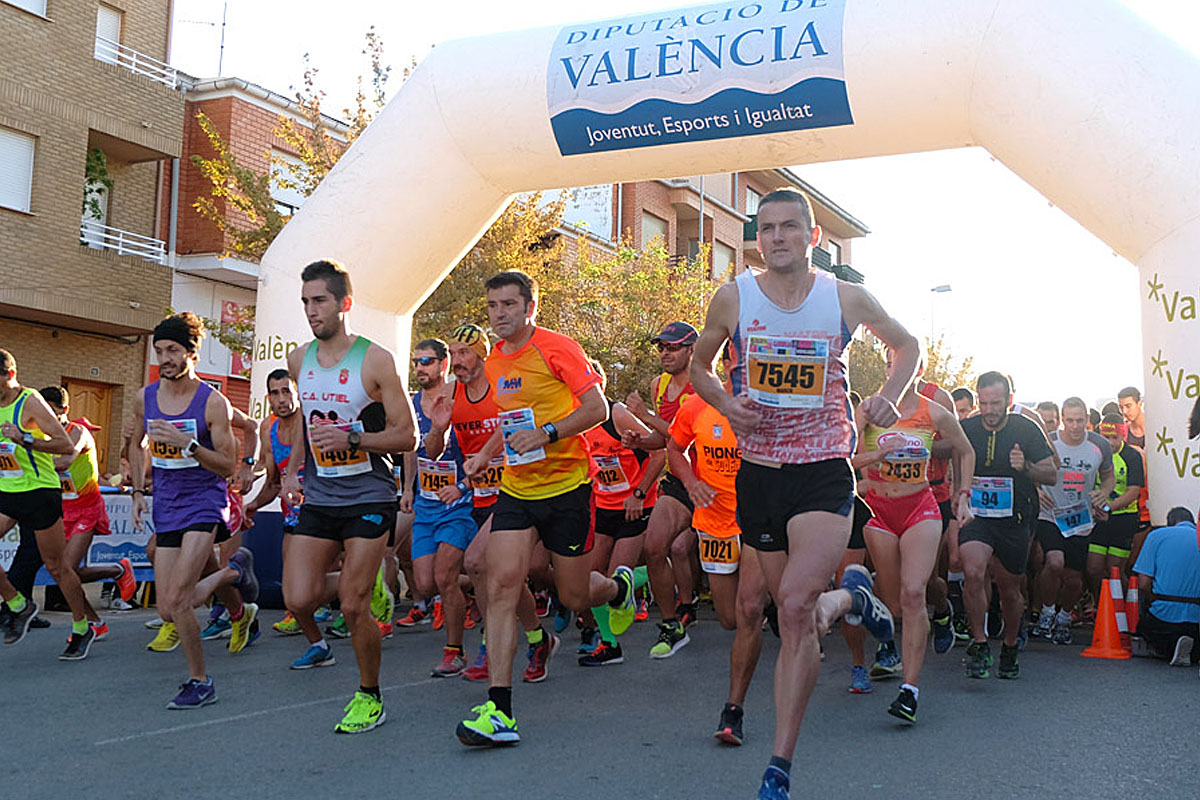 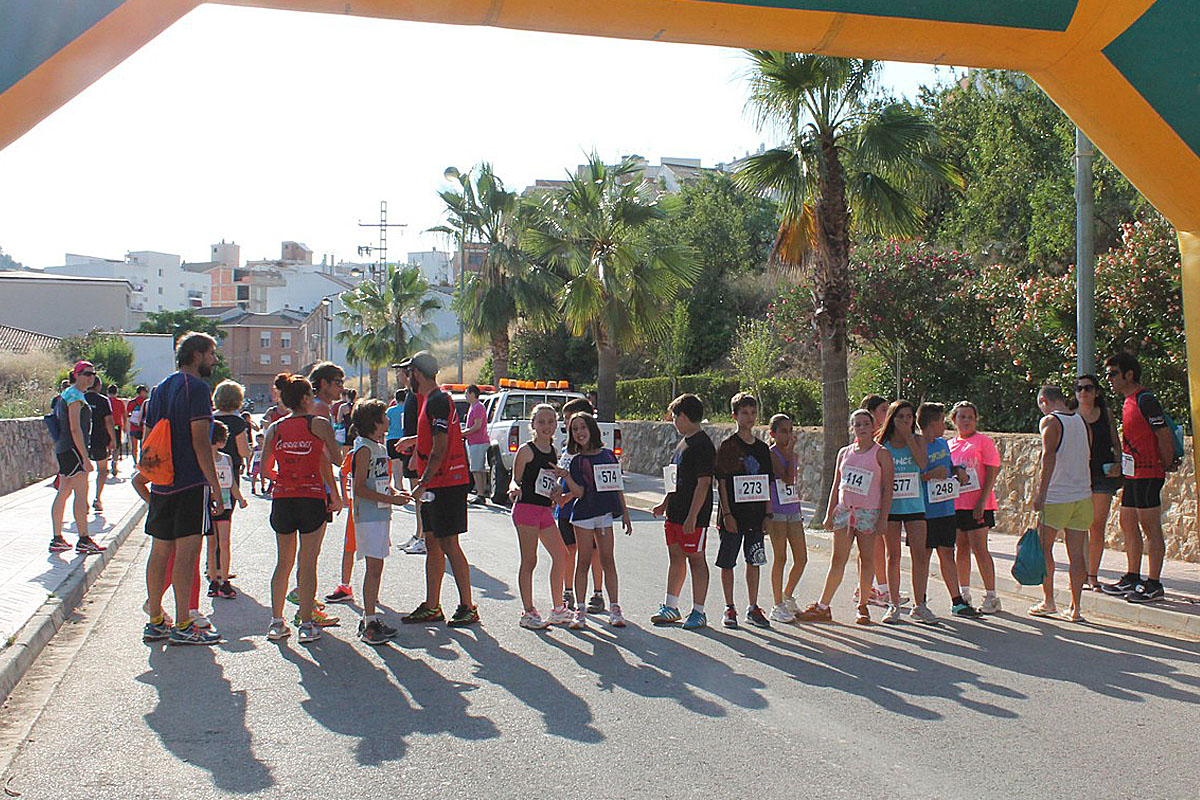 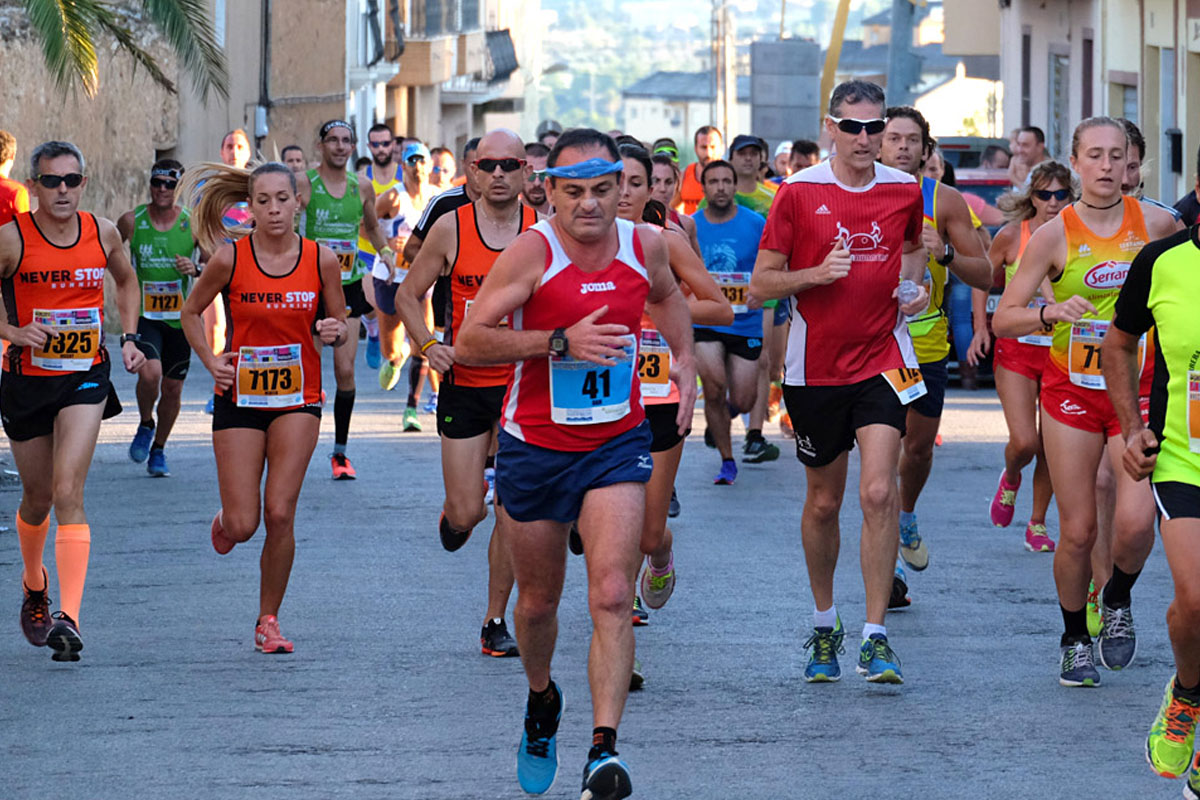